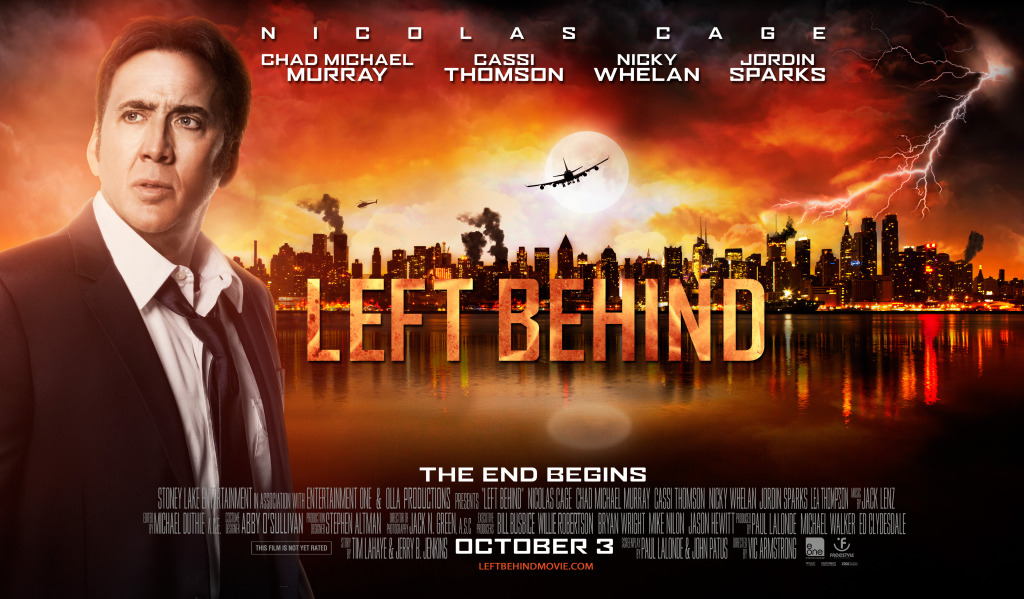 Left Behind starring Nicolas Cage, Chad Michael Murray, and Cassi Thomson opened yesterday in theaters. Most of the reviews I’ve read from the general media have given the film poor ratings. I was shocked at their reaction. My husband and I enjoyed the movie, and I watched it twice. I’m no expert on special effects, videography, or acting, but I know what I like, and I enjoyed this film.

With many changes and omissions in the story, this 2014 version of Left Behind revisits the series about the Rapture that starred Kirk Cameron beginning in 2000. The films are based on the best-selling Left Behind series of novels by Tim LaHaye and Jerry Jenkins.

When I watched the 2014 film, I was disappointed not to see more biblical information included. I was waiting for the gospel to be presented as an explanation for what had happened to those who disappeared. Then I surmised the filmmakers were trying to reach a wider audience than just Christians. However, from the way the secular critics talk, you’d think the film pounds viewers over the head with the Bible. It doesn’t, but I think it might inspire people to find out what all this Rapture talk is about.

I find it interesting that secular critics are bashing Left Behind, where the biblical message is toned way down, while praising The Song, a movie full of Scripture with a clear biblical message, especially if you watch through the credits. (Please read my review of The Song for cautions about this film.)

I view Left Behind as more of a crossover movie, and maybe that’s one of the reasons the critics hate it. Perhaps they want to punish Nicolas Cage for venturing into faith-based films. I applaud him for it.

From the reviews I’ve read, it is obvious some critics don’t understand who will be raptured. Among their descriptions of raptured folks are: “pure of heart and intention,” “good and innocent,” and “devoutly religious or just young and pure.”

They don’t get it. Only Jesus can make a person pure, good, and innocent because of His death that paid for the sins of all humans. We either accept or reject that free gift. If we don’t want Him, He won’t force Himself on us. Those that believed in Jesus in the movie were raptured; those who didn’t weren’t, except that all children were taken with the believing adults.

Yes, as the critics said, I noticed that some of the acting wasn’t the best, and the sets didn’t cost a fortune, but then I notice that in some of my favorite films by the Kendrick Brothers. When I watch a movie, I want to come away inspired to live a better life, challenged to think more deeply, or just simply entertained in a tasteful way. State-of-the-art special effects don’t do that. Multi-million-dollar Hollywood extravaganzas rarely do that. Good stories about people wresting with real life and finding real solutions do. And whether the critics like it or not, the Bible has the best – the only– true answers to life.

If you want to see an entertaining film about what might happen on the day the Great Tribulation begins, go see Nicolas Cage in Left Behind. I hope future films in this series will present the gospel message more clearly. Meanwhile, you can enjoy a suspenseful film where possibly the only caution would be the occasional depth of Cassi Thomson’s neckline.