On June 26, 2015, the United States Supreme Court declared same-sex marriage is a constitutional right. Like the Roe vs Wade Supreme Court decision legalizing abortion, this ruling brought joy and celebration to some, and deep disappointment to others across the nation.

In the beginning, God created male and female (Genesis 2:20-25). This is His design for the well-being of both sexes and for children, giving them the love, guidance, and protection of both a mother and a father. Now God’s ruling has been overthrown by five justices in a case presented by the LGBT (Lesbian, Gay, Bi-Sexual, and Transgender) community and their supporters.

In an article on the Supreme Court ruling, Justice Kennedy, who wrote on behalf of the five judges who found a constitutional right to marry, said:

“It must be emphasized that religions, and those who adhere to religious doctrines, may continue to advocate with utmost, sincere conviction that, by divine precepts, same-sex marriage should not be condoned. The First Amendment ensures that religious organizations and persons are given proper protection as they seek to teach the principles that are so fulfilling and so central to their lives and faiths, and to their own deep aspirations to continue the family structure they have long revered.”

Chief Justice John Roberts argues that the decision “creates serious questions about religious liberty. Many good and decent people oppose same-sex marriage as a tenet of faith, and their freedom to exercise religion is—unlike the right imagined by the majority—actually spelled out in the Constitution.”

Justice Alito also dissented, saying: “By imposing its own views on the entire country, the majority facilitates the marginalization of the many Americans who have traditional ideas.”

To read the full article, which covers many aspects of how this law will affect those who hold traditional views of marriage, click here.

The current debate is plagued by this binary lens. Those on the left try to lump everyone who disagrees with them into that right side. If you don’t support, you hate. Meanwhile, those on the right see compromise and spinelessness in anyone who doesn’t get red-faced and militant. If you don’t hate, you support.

But true followers of Christ will walk neither path. We have something to say that no one else is saying, or can say.

Distancing ourselves from both the left and the right, we don’t celebrate 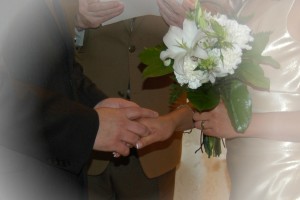 homosexual practice, we acknowledge God’s clear revealed word that it is sin; and we don’t hate those who embrace homosexuality, we love them enough to not just collapse under the societal pressure. We speak the truth in love into this confusion, saying, simultaneously, “That’s wrong” and “I love you.” We’re not the left; we say, this is wrong. And we’re not the right; we say, you’re loved. We speak good news, with those sweetest, deepest, most glorious words of the cross — the same words that God spoke us — “You’re wrong, and you’re loved” (emphasis editor’s).

The legal ramifications of how this new law affects Christians and Christian institutions will unfold in time. But how should you and I respond—to family members, colleagues, friends, and others who celebrate this ruling?

Here are some thoughts:

I feel as strongly about this issue as most believers who want God’s Supreme Law to be honored. But let’s not forget: As Christians, our response is going to be watched by many. I need to pray for a response that shines with God’s love to a lost and confused world—do you?

Will you pray with me?

Without your Holy Spirit filling me, I can do nothing that honors You. Keep me from doing harm, or being a stumbling block to those who need You so desperately. Work in me the right heart, the right perspective, and the right words and attitudes. Along with all my Brothers and Sisters, may we not only be salt and light in our world, may we also be living ambassadors. Enable us to point to the forgiving, transforming, and grace-filled God who changes lives and blesses those who seek Him. Amen

Poppy Smith is British, married to an American, and has lived in many countries. A former Bible Study Fellowship teaching leader with a Masters in Spiritual Formation, she is a multi-published author who speaks widely, challenging  women to make their lives count by looking at their choices, attitudes, and relationship with God.