For two years, people have been asking me when the Kendrick brothers will be doing another film. Well, here’s the answer: Alex and Stephen Kendrick—creators of hit faith films FIREPROOF, FACING THE GIANTS, and COURAGEOUS—have just wrapped principal photography on their fifth movie, yet unnamed. This one is about prayer and features New York Times best-selling author and Bible teacher Priscilla Shirer. In addition to Shirer, the cast includes T.C. Stallings (Remember the really mean gang leader in COURAGEOUS? In real life a nice guy and good actor), Alex Kendrick (MOMS’ NIGHT OUT, COURAGEOUS), Robert Amaya (MOMS’ NIGHT OUT, COURAGEOUS) and veteran actress Karen Abercrombie (MY NAME IS PAUL, MOUNTAIN TOP). It introduces comedian Michael Jr. as Michael and Alena Pitts as Danielle, and features a cameo by renowned speaker Beth Moore in her first acting role.

Each Kendrick Brothers film explores a subject deeply important to Christians and the Christian life: personal integrity in FLYWHEEL, resilient faith in FACING THE GIANTS, loving marriages in FIREPROOF and heroic parenting in COURAGEOUS. The fifth film is a family drama with humor and heart focused on the power of prayer and its primary role in the Christian life. 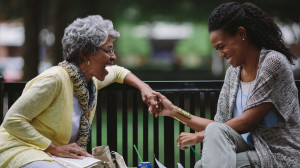 “We made this film to inspire, challenge and motivate families to fight the right kind of battles and to fight them the best way possible,” said Director and Co-Writer Alex Kendrick. “We have plans for everything—careers, finances, health. But what about a strategy for prayer for our lives, our spouses and our children?”

Filmed in and around Charlotte, N.C., this is the first Kendrick Brothers project shot outside their hometown of Albany, Ga. It drew more than 1,000 volunteers from 85 churches in the Charlotte area who stepped up and reached across denominational lines to support the production.

“We’re going after something here that could radically improve our culture, and moviegoers will experience it within the context of an inspiring and emotional story,” Producer and Co-Writer Stephen Kendrick said. “Prayer is so much more than people realize. It can powerfully affect every problem and need in our lives if engaged from within a vibrant relationship with God.”

It makes sense that the Kendricks would make a movie about prayer, since every movie to date has been bathed in prayer from before conception through post-release. I’m looking forward to seeing what the brothers have in store for us this time. What about you?

In fact, let’s all join in and pray that the film will be what God wants it to be and have the effect on our families and culture that He wants it to have.

Jeanne Dennis, Heritage of Truth
SYNOPSIS
A family-friendly drama, the film is about learning to fight the right kinds of battles. Filled with humor, wit and heart, it follows Tony and Elizabeth Jordan, a middle-class couple, and their daughter, Danielle, as they struggle through personal, marital and spiritual issues. Their lives are forever changed after Elizabeth meets an elderly widow who helps her develop a secret prayer room in her home.