He Gave His Only Begotten Son

Imagine what it must have been like for God to give up His Son to the unimaginable pain of carrying the sin of the world. God gave His only Son to die on a tree and pay for the world’s sin, both yours and mine. We can’t begin to understand that kind of pain and sacrifice.

A couple I met when I was young in my faith had just lost their only son who was about ten or twelve years old. For months, the parents, his sisters, and people all over the city had prayed for the boy’s recovery, but God answered their prayers differently than they’d hoped.

He said no. The mother told me that she had reached a point during her son’s illness where she felt she had to give her son back to God. The boy knew he was dying and assured his parents that he was ready to be with the Lord.

“He was only lent to us for a time,” his mother said. She admitted that even though her grief was incredible, she found peace in the midst of it. “I know that God loves my son much more than I ever could. He’s in good hands.”

We who put our trust in the name of Jesus Christ are in good hands too. Let us never take this truth for granted but always rejoice. For He is risen, just as He said! Because He lives, we have the sure hope of eternal life. 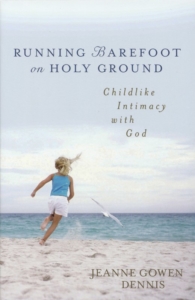 Part of this post came from my book Running Barefoot on Holy Ground. Contact me to buy a signed copy directly from me.

Share this!
Tags: Did Jesus die for me?, God gave His Son, gospel, Heritage of Truth, Jeanne Dennis