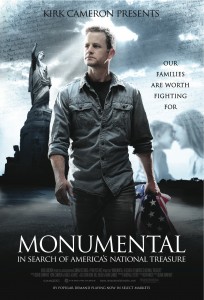 I watched Kirk Cameron’s movie Monumental two nights ago on INSP. In his attempt to discover how Americans can return to the foundational values that have kept us a free nation for over two centuries, Cameron retraced the steps of the Pilgrims who landed at Plymouth Rock. The movie is named for a monument in Plymouth, Massachusetts, that symbolizes the foundational principles promoted by the Puritan fathers: overarching faith, which leads to morality, law, education (passing on the heritage), and liberty.

This movie has been criticized by Christians and non-Christians alike. Some Christians lament the absence of a clear gospel message, although the film states unequivocally that the Pilgrims’ faith was in Jesus Christ and based wholly on Scripture. Non-Christians often chose to criticize Cameron’s personal beliefs rather than the film itself. I think they discerned the faith message of the film better than many Christians did, and so avoided it by attacking Cameron personally.

Rather than producing a film for a limited Christian audience, it appears Cameron set out to produce a film for all Americans, calling us back to the foundational principles that made America great so that we can maintain the liberties we have. The documentary made it clear that biblical faith in God—Christianity—was the foundation for America’s liberty, which is what I think angered many non-Christian critics. Coupled with that faith, however, was religious freedom.

The Pilgrims had fled the tyranny of a state-controlled church. That’s why freedom of conscience, freedom of religion, was so important in the formation of our nation. Christian critics might recall that religious freedom is itself a biblical principle. Even God will not force Himself upon those who prefer to reject Him. Yes, Jesus is the answer and the gospel must be preached, but this documentary was not about the gospel. It was a call to Americans of all faiths (and no faith) to look at our roots and understand what it takes to hold on to our freedoms.

At one point in the movie, Cameron reflects on what he has learned from historian David Barton, saying, “The United States Congress was commissioning and printing Bibles to be given to all the people because they knew that that’s what would produce the character necessary to make America blossom and flourish and thrive. Benjamin Franklin, Thomas Jefferson understood that without Christianity you have no basis for a free and just nation. And that’s why they promoted the principles of Christianity, even if they were not themselves personal, genuine followers of Jesus Christ.”

Cameron concludes that the answers for America lie not in the White House but in the houses of each and every American. We need to return to the foundation that made America great, to the basic principles of Christianity, which produced our liberty in the first place.

Freedom of religion is perhaps the right most in danger today. Cameron’s focus on the Christian principles of our founders emphasizes the importance of keeping that fundamental right intact. John Adams—a founding father, the second president, and a Christian from Massachusetts—wrote: “Our Constitution was made only for a moral and religious people. It is wholly inadequate to the government of any other.” Without the morality of God’s law and our faithful dependence on Him, our nation cannot survive.

Cameron’s documentary is not perfect, but it is a noble attempt to direct us out of the chaos we face in America today and point us back to the principles of freedom found in God’s Word and in the hearts of all who belong to Jesus Christ.