For those of you who happen to live near cities where The Lost Medallion opens today, it appears you are in for a treat. It seems we have here an action-adventure movie that children and preteens can enjoy with their parents without the ungodly influences of Hollywood woven in. Instead, we have a fantasy time-travel adventure where the truth of Scripture prevails. Here is the official synopsis:

The journey of The Lost Medallion: The Adventures of Billy Stone commences as Daniel Anderson (Alex Kendrick – Courageous, Fireproof, Facing the Giants) visits a foster home to drop off a donation and is quickly roped into telling the kids a story. Daniel tells the tale of Billy Stone (Billy Unger – Lab Rats on Disney XD, National Treasure, You Again) and Allie (Sammi Hanratty – American Girl, A Christmas Carol), two 13-year-old friends who uncover a long-lost medallion and accidentally wish themselves back in time. In order for Billy to save Allie’s life, he must give up the lost medallion to the evil warlord, Cobra, (Mark Dacascos) who rules the island and its people. Now, in order to retrieve the medallion and save the island people from slavery, Billy and Allie must work together with a young arrogant king (Jansen Panettiere – The Perfect Game), his best friend, and a wise old man (James Hong – Kung Fu Panda, Chinatown, Blade Runner). Together, this unlikely group will learn not only how to work together, but when they do, great things can be accomplished.

Here is what people I respect are saying about it:

“The Lost Medallion is a wholesome movie that will take you back to a more innocent time but will keep you on the edge of your seat. My kids loved it and have watched it again and again. You’ll be blessed by The Lost Medallion and I’m guessing that you will still be talking about it with friends and family for a long time after you leave the theater.” – Alex Kendrick, Co-Producer & Co-Director of Facing the Giants, Fireproof & Courageous 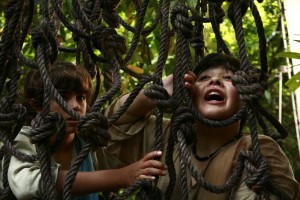 “As much as I’ve been encouraged by the growth of the Christian film ‘industry’ over the last several years, it’s been obvious that most films have been dramas targeting adults and occasionally teens. I’ve been silently hoping for an action adventure geared toward tweens. With ‘The Lost Medallion,’ I get my wish, while potentially thousands of young people get their very own ‘Indiana Jones’-ish big screen motion picture to boot. What’s more, not only will they be entertained, they’ll get a few strong spiritual nuggets to ponder as well.” – Bob Waliszewski, Director, Plugged In: Focus on the Family

“The Lost Medallion is a time-travel adventure-film ideal for tweens or family viewing. The underlying messages are certain to trigger follow-up discussions on topics of significance.” – Dr. Mary Manz Simon, Children’s Author, Educator, Syndicated Radio Host, and Children’s Consultant to ICRS  (Note: Dr. Mary has been a guest twice on Heritage of Truth.)

You can find out more about The Lost Medallion here: TheLostMedallion.com. Here’s a link to the official trailer.  By the way, if it is not in your city, go to the website to find out if you can help bring it to a theater near you. Enjoy!