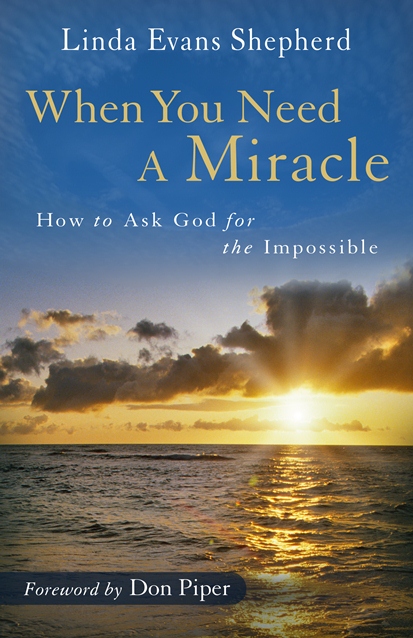 When You Need a Miracle by Linda Evans Shepherd

Do miracles happen today? Are there right and wrong ways to ask God for miracles? In her book When You Need a Miracle: How to Ask God for the Impossible, Linda Evans Shepherd says yes to both questions and offers advice and sample prayers for readers to use.

Overall, Shepherd’s book is a scripturally based and well-balanced perspective on a difficult subject from a woman who knows what it means both to receive miracles and to have them denied by the almighty, sovereign God. An example of an unanswered miracle prayer is her severely handicapped daughter, who was not healed, but instead blesses others through her disabilities.

Shepherd addresses challenging topics that could interfere with prayer, such as unconfessed sin, anger, unforgiveness, and disappointment with God, by referring to Scripture and explaining what God’s Word says about these topics. She discusses how to pray in God’s will instead of our own, how to intercede for others, and how to offer prayers of faith while realizing that God is still God.

“God is not our puppet,” she writes. But “there is an undeniable correlation between asking God for miracles and receiving them.”

This is true. However, as strong and valuable as this book is, readers and churches that might consider using the book need to be aware of some potential issues.

First, the author often quotes from paraphrased versions of the Bible, such as The Message and The Living Bible, which in this reviewer’s opinion weakens rather than supports her message. In most cases, faithful Bible translations would have proved her points more powerfully and accurately than paraphrases. Only God’s Word is “living and active and sharper than any two-edged sword, and piercing as far as the division of soul and spirit, of both joints and marrow, and able to judge the thoughts and intentions of the heart” (Heb. 4:12). Paraphrased versions of the Bible cannot make that claim.

Secondly, the author quotes some controversial authors like Richard Foster and Philip Yancey, though the particular quotes she uses are not problematic.

Thirdly, references to some people’s experiences mentioned in the book may be an issue. When dealing with the spirit world, it is important to verify every experience with Scripture. Satan disguises himself as an angel of light. We must guard our hearts and minds with God’s Word.

Finally, Shepherd wisely admonishes her readers to exercise humility in their prayers and spiritual battles. She quotes Jude 8–10 to remind us that even the archangel Michael did not dare to come against the devil when he was sent to retrieve the body of Moses, but said, “The Lord rebuke you.” However, later in the book, Shepherd advocates confronting evil spirits directly “in the power and authority of the name and blood of Jesus.” Examples include: “I break . . .” “I command . . .” and “Tell the demon to be quiet in the name and power of Jesus.”

If even the mighty Archangel Michael did not rebuke the devil directly, how can we think it’s acceptable for us? We should be humble and honest and not go where even angels do not tread. We must resist the devil in Jesus’ strength, but remain dependent on Jesus alone to win the victory. Only He has defeated and can defeat this enemy of unrighteousness. It is not our place.

As I wrote above, Shepherd’s book overall presents a scriptural and well-balanced perspective on prayer and miracles, such as in the quotes below:

I applaud the author for tackling such a difficult subject and doing it well, but readers should prayerfully search the Scriptures (actual translations) as they read the book.

Copyright © Jeanne Dennis 2012. Permission is granted to reprint or republish this review only in its entirety.